Is it Moroccan Oil or Argan Oil? Whatever it is, Argan Allure is cheaper than the competition. But is it undiluted or ethically produced? Rumors are swirling and some think it’s fake.

Argan Allure Has Some Explaining to Do…

Argan Oil comes from the argania Spinosa tree and is manufactured in a fair trade co-operative with benefits going to the Berber women of Morocco who perfected the production technique over thousands of years. Moroccan Oil, on the other hand, is often mass-produced in factories, with no income or health benefits going to the women who deserve them most. Moroccan Oil is often diluted with preservatives too, which may explain why it’s cheaper than true, pure argan oil.

Argan Allure’s features are many which are why it has been called the beauty product of the year. Among its best and most popular features are:

When you purchase a product, you want it to be free and clear of any harsh chemicals that can be harmful to your body and your overall health. And even if it is diluted with preservatives, the product is still safer than half the moisturizers at your local Wal-Mart

Argan, and even Moroccan Oil, is one of those products with multiple purposes. For skin, it can clear up acne, eczema, psoriasis, wrinkles, and much more. For nails, it can soften cuticles and make your nails stronger and grow faster. For hair, this product can repair the damage that blow dryers and other appliances can cause as well as damage caused by coloring or over-treating.

When you hear the word oil, you instantly think of a greasy substance that leaves a film on whatever it is applied to. But this oil has no greasy feel whatsoever. It goes on smoothly and evenly and does not clog pores.

Those who purchased Argan Allure were reasonably happy with it. Among some of their positive feedback was:

Too often, creams, moisturizers, and hair treatments are loaded with harsh chemicals that smell bad, are difficult to pronounce and are probably not the best remedy for whatever condition you may have. Many consumers noticed an improvement in their dry skin or their frizzy, dull hair. Skin became smoother and hair became shinier. And the fact that it had earned the title of beauty product of the year gave it some credibility The question remains though, whose product of the year?

One customer says the product was effective on her knees and elbows which were especially dry during the winter months. After only using the product for one day, she noticed a difference.

Another woman had read about the product online and decided to give it a try on her lifeless, dull hair. She massaged a small amount into her scalp and combed it through her hair and reported a significant difference in the way her hair felt as well as the extra shine it had after drying and styling it.

A woman with crow’s feet had tried many of those popular face creams that promise to eliminate the signs of aging only to discover they were just promises and not the real deal. When she decided to try this product, she said she actually saw a difference in the way her crow’s feet looked as well as some random wrinkles she had around her mouth.

Some buyers were not as impressed with Argan Allure and took issue with some of its features, including:

There is no guarantee that the product will work for everybody, but that can be said for just about any product. Severe skin conditions or skin that is ultra-sensitive may not respond well to the argan oil. And with some question, whether it’s undiluted argan, there were, in fact, some reports of adverse reactions with Argan Allure

One client bought Argan Allure believing it was cheap argan oil. Yet the redness she experienced convinced her to speak with a dermatologist, who explained the difference between argan and Moroccan oil. There were several reports of redness with Argan Allure, to be honest, and with that cheap price, it’s hard to believe that this is pure argan.

The short guarantee made things more difficult, too. After using Argan Allure for six weeks, and seeing no real benefit to her hair or skin, she tried to return the product, yet she didn’t realize the 30-day guarantee had since expired. Out of money, though not a lot of money.

A customer who had purchased the product for her frizzy, kinky hair did not see much taming of the do after trying the product for two months. She too was unaware that Argan Allure was only guaranteed for 30 days, and when she tried to return the product, she was flatly refused.

Whether it’s argan oil or Moroccan oil – and consumers think it’s Moroccan – Argan Allure is a watered-down version of Skinception’s argan oil. But it’s affordable and comes with the same skin and hair applications. More or less anyway, and if you’re looking for something that vaguely passes for argan oil, it might be Argan Allure. A moderate recommendation.

Price: As low as $40.80 Bottle Though it’s expensive, and there’s no discount packaging, Essence of Argan is a quality product and rounds out at number two Read more below… Visit Website Essence of Argan: An Ancient Treatment for Today’s Hair and Skin There’s a bit of a drop-off in value after Skinception Argan Oil…. 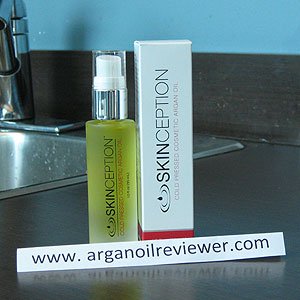 Skinception Argan Oil Review – 100% Natural, Organic and Pure Skincare Product – Moroccan Tree – Skin Benefits: Acne, Aging, Hair Healthier. My Experience With skinception argan oil review. I am a believer in natural skincare products. I have had terrible reactions to chemical-based products, and knowing what is in them is challenging. Skinception Argan…